Ahh…. A nice and welcome break from work. I have not stopped cooking and though I don’t plan on doing anything crazy for St. Patrick’s Day, I cooked up a storm! I’ll make this short and sweet… I made these little potato candies and I just love them. They remind me of when I was a kid and we would make them in elementary school.

Irish potatoes are a dessert that originated in the Philadelphia area. Despite its name, they aren’t from Ireland, and they have no potatoes in them (and definitely shouldn’t, ew). Also, don’t let anyone tell you that any nuts belong in them, either. Double ew. Then you roll them in cinnamon, and just like that, you have a little potato!

These are made without dairy, gluten, or any crap that makes you feel bad. More treats to come, enjoy 🙂 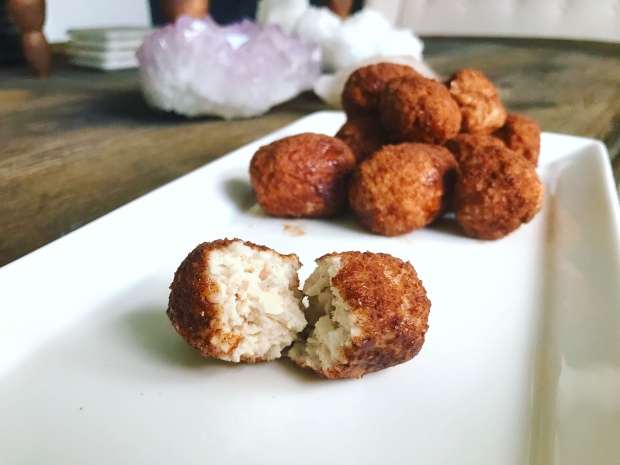 I’m not dead... just tired. 😎
Check out deez nuts. (Sorry, mom)
Broccoli is the best, even my dog says so 🥦🥦🦮
‼️ attention foodies, spiritual friends!‼️
I’m inviting cooler weather around by making soups. It hasn’t worked yet, so I’ll need some help 🥵 this paleo, keto (and vegan option!) Cauliflower Leek soup is a healthy version without potatoes, but you’d never notice the difference! Enjoy with some crumbled bacon or scallions... or both 🤤 link to recipe in bio!
Election Day is here! If you’re eating your feelings today (look, 2020 has been hard), make sure it’s something tasty and nourishing to get you through the day. Search “pumpkin risotto” on the blog for this delicious and easy recipe! You can even make some arancini balls with the leftovers 😋 And don’t forget to GO VOTE!!
Loading Comments...
Comment
×
%d bloggers like this: