While I probably shouldn’t start this post off having you doubt my baking abilities as I tell you to bake something, I will say that I am REALLY surprised these came out, because  I cook. I usually only cook. Because I. Cannot. Bake. Well, I couldn’t, at least not until today. Chalk this up to a victory!

Sundays are a weekly tradition of cooking a huge meal and inviting everyone over. The Sunday crew folks are my guinea-pigs, which so far has worked out quite well. I usually experiment with some crazy flavors, and so far, no one has complained, thrown up or died… so we keep it going. The family pastry chef was en route back home from a fun weekend up at Penn State for Arts Fest, so I had to step in and whip something up. I don’t have a sweet tooth, so fruit it was. Lo and behold – these babies were born. I lucked out, they came out pretty good in the first batch… even added a little coconut to give them a summery flavor. Even still, I don’t have any aspirations to own a bakery…. So these will do for now. And they’re paleo, wahoo!

One fun addition to these is the salt I used in the muffins… I really love salt. I could’ve been a farm animal in another life, with their little salt blocks they have. Years ago, I can remember being too young to drive myself to the local saddlery, so my mom would take me to go get supplies for the horses; treats, supplements, a salt lick, etc. I was sitting in the front seat of my mom’s car holding one of the blocks, wondering if it really just tasted like salt.

For the record, yes, it does. Yes, my mom was horrified. And yes, I just admitted to licking a salt block for horses. Final thought: 7 out of 10, would do it again. But, I digress. 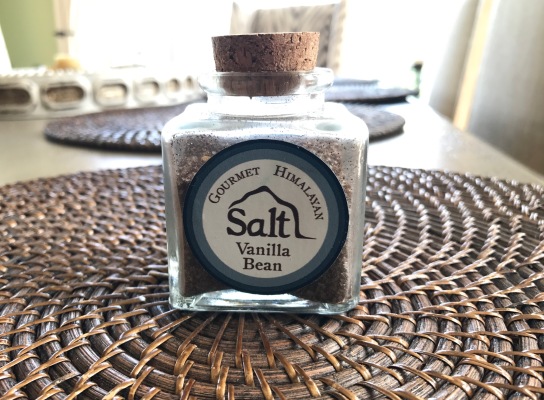 This salt, by Gourmet Himalayan in California, is a mix of vanilla beans and Himalayan sea salt, which is a fun addition to baked goods, or maybe even some salted caramel chocolate? I sense another experiment coming up.

The best part about using raspberries in recipes like this is because they’re in season, it’s summer, and it makes SUCH an amazing color that these pictures don’t really do it justice. This time of year is such a great time to experiment with dinner and dessert. Everything is ripe, the colors are amazing and vibrant… there’s nothing like eating dinner outside on the deck, barefoot, listening to all the little birds as the sun goes down. If you’re ever feeling like you’re moving too fast, or don’t have enough time to slow down, just grab a muffin and go sit outside and stare at a freaking tree… instant calm.  Once you’re out there, it’s that much easier to see that there’s just so much to be thankful for.

Note: fruit could probably be added to these, but also adds moisture. For about ¾-1 cup of fruit, I might add another tablespoon or two of almond flour to absorb. Riper Fruit = more watery.

The muffins should be done around the same time as this sauce, so once you have them out of the oven, drizzle the mixture over-top immediately. A little melting and dripping makes them pretty, so no need to let them cool before adding the drizzle.

Sprinkle the remaining lemon zest over them and serve. Enjoy!

One thought on “Paleo Lemon-Poppyseed Muffins with Raspberry Drizzle”